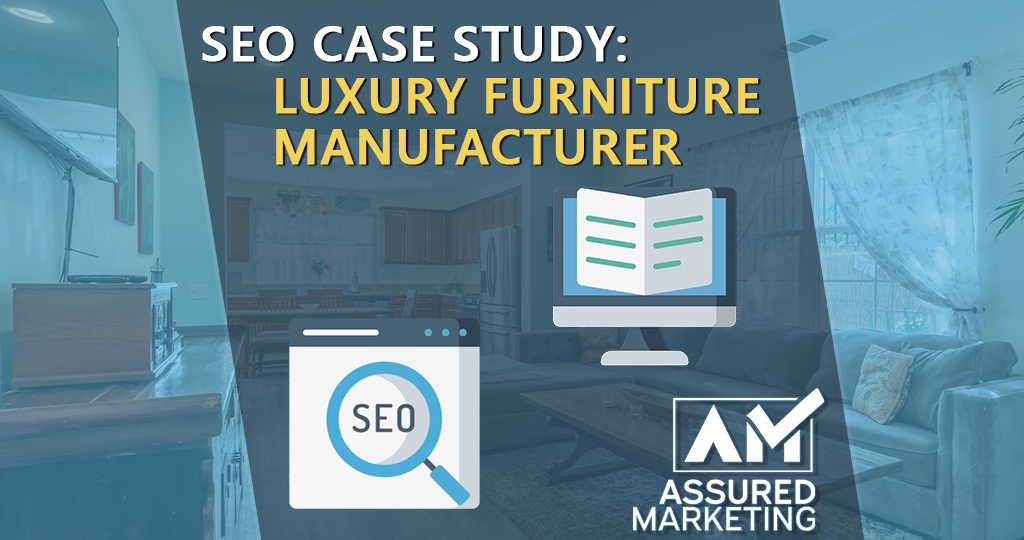 This client manufactures bespoke luxury furniture in the forms of dining room, living room, bedroom and commercial furniture throughout the UK. Specialising in live-edge wooden furniture that uses the natural curves and edges of live wood to create a stunning look that provides beautiful style for the centrepiece in many rooms of the house.

Initial Conversations With The Client

Assured Marketing were originally contacted by the owner of this business regarding a number of different marketing services. The initial marketing plan of the business revolved around social media and there were ambitions for PPC to be used as a way of garnering more online custom for their products.

During initial discussions with the owner of the business there were many notes made regarding the organic performance of the website in search results as well as the owner feeling that the tight budget the business had at that stage needed to be handled efficiently.

Upon completion of a full site audit we were able to advise the client based on our findings, it was highlighted to us that given the opportunity analysis highlighting that there was great potential to begin ranking high for industry specific keywords quickly. We explained the process that our SEO campaigns take and how long we would expect for them to begin seeing noticeable results from the campaign. After this, the client better understood the benefit of SEO against the previously discussed methods due ot’s ability to generate sales in a more organic nature than advertising and the fact that it would be expected to produce better quality leads than were currently being obtained from social media.

Month 1 was centred around metrics such as speed, performance and usability of the site. In its existing form some of the pages were not as responsive as they needed to be in order to eliminate a high bounce rate and other issues such as mobile usability and poorly optimised content were leading to the site being punished by Google in its organic search rankings.

Taking the findings from our initial audit, these fixes had been pre-identified and were able to be resolved with a methodical and structured approach to our work. Image content and videos were correctly optimised to reduce load speeds, and non-responsive pages were edited in order to remove the errors that had been flagged on Google Search Console.

Key Stats At End Of Month 1: Organic impressions through search had risen by over 5,000 with a higher click-through-rate (CTR) of 1.3%. There had also been a noticeable uplift in the number of web enquiries seen by the client.

Toward the end of the first month, we liaised with the client regarding an update to the written content on the site and the creation of new landing pages for the different areas that they specialised in as a way to ensure the keywords identified in our opportunity analysis were being incorporated into the website.

As the second month commenced, our strategy to implement more keyword rich content throughout the site was implemented. We created two of the three landing pages covering the different specialist areas of the client and progressed to then generate authoritative backlinks to these pages in order to enhance their search rankings for keywords against their competitors.

The pages generated a leap in organic impressions as well as an improvement in the CTR of the client’s website on organic search. Whilst covering the keywords and backlink areas we then began to implement the remaining back-end fixes on the site including meta-data optimisations and further implementation of H1 & H2 tags on the site.

Key Stats At End Of Month 2: Month 2 saw an increase again in impressions by a further 35% with the number of clicks rising by a staggering 90%. These improvements were largely down to the new content on the site in the form of the first 2 landing pages. Average position also climbed slightly during month 2, something that would not normally correlate with the number of impressions rising.

As month 2 ended we looked to strategise around the third landing page for the final specialist area covered by the client in their industry alongside how we could begin to implement some aesthetic changes to the design of the website in order to help boost conversions on the site from the new traffic that was being generated by the SEO efforts.

The third month saw the final implementation of the remaining landing page for the site with keyword rich content on the last specialist area of the client. This landing page differed from the previous two in that it was location-based in a specific area of the UK in which the client can provide the service.

As it is a service providing fitted furniture into local residential and commercial properties there had to be a focus on location-based keywords, as well as looking to more local based citations in order to generate backlinks to this page.  This again resulted in the site receiving more impressions, although this impact has yet to be seen to its full effect at the time of writing.

Key Stats For Month 3: Month 3 again saw impressions rise this time by 19% alongside the number of clicks rising by 34%. The average position of the website in SERPs rose by around 14% in this time also. These improvements were down to a combination of both adding the final landing page to the site as well as targeted backlink outreach that has improved the rankings of the site in search results as a whole.

Our plan moving into month four on this campaign is to begin creating optimised blog posts for the business so as to increase the amount of keyword rich content on the site. We will also be working with the client to continue adapting the design of the site in order to improve conversion rates on the site.

Reports are made to this client on a weekly basis monitoring a wide range of KPIs such as ROI and other SEO metrics. There is consistent communication on all aspects of the campaign between our team and the business owner, including consultation calls on request when there are elements that require dual input to be implemented successfully.

Given that SEO can take on average between 4-6 months to see its larger effects, we have been thrilled to relay these great steps forward to the business owner each week/month. We are continuing to beat previous sales records on a regular basis for the business and are proud that during the 2nd month we actually saw their best sales week to date!

We will continue to further advance the online presence of this business through our SEO efforts as well as help with their overall marketing strategy.